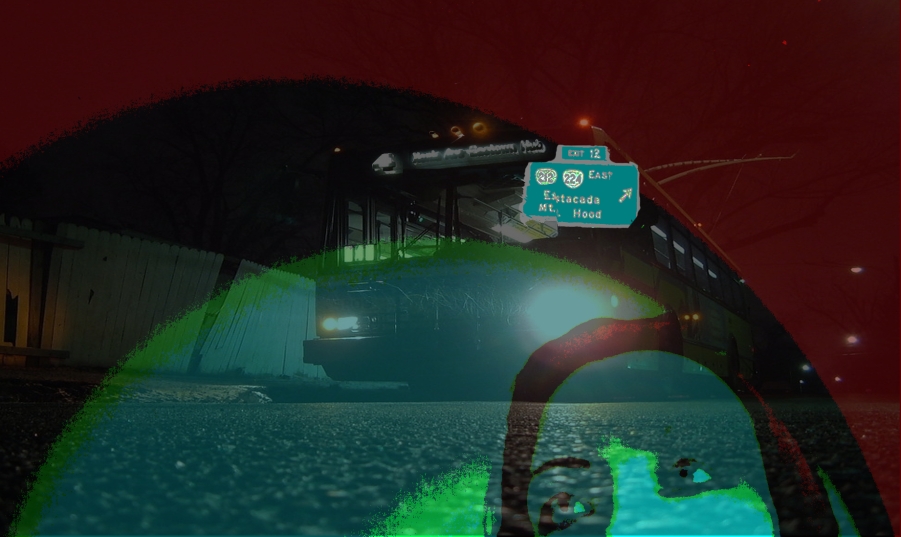 He turned the ignition. He killed the interior lights. The joyride began—or should I call it a painride?

The bus veered out of the suburb. It started racing down country roads. With the interior lights off, it would appear that the bus was off-duty. I could see that we were no longer on the route that had led to the terminus.

The bus was traveling on roads so remote that I didn’t see houses, or even streetlamps. The driver made his bus lurch over bumps. Its sides began to rattle in a strange way. He steered his tonnage with a frenzy that made me think of Paul Revere galloping on his horse, the Revolutionary War as told to us in ancient grade school textbooks:

Stallions! Lanterns! Bells of blood and invasion! Watch out, kiddies, a bayonnet will floss your guts for good! Listen children, and you shall hear of the bus driver’s brain that went very queer…

I decided to stay in my seat, see if an out would present itself.

I stress, THIS WAS NOT AN OUT.

I wondered if I should ask where the bus driver was going, but I thought better of it. I waited a minute, gathering my bag, my body in slow motion.

I could hear in his words the same swagger as his walk. The role was playing the man.

Step by step, I moved to the front of the bus, gripping each seat as the vehicle swerved through ink-black night.

We were entering the forest that stood tall and dark in a soil full of termites and wriggling worms—a cold world, beyond the hum of farms.