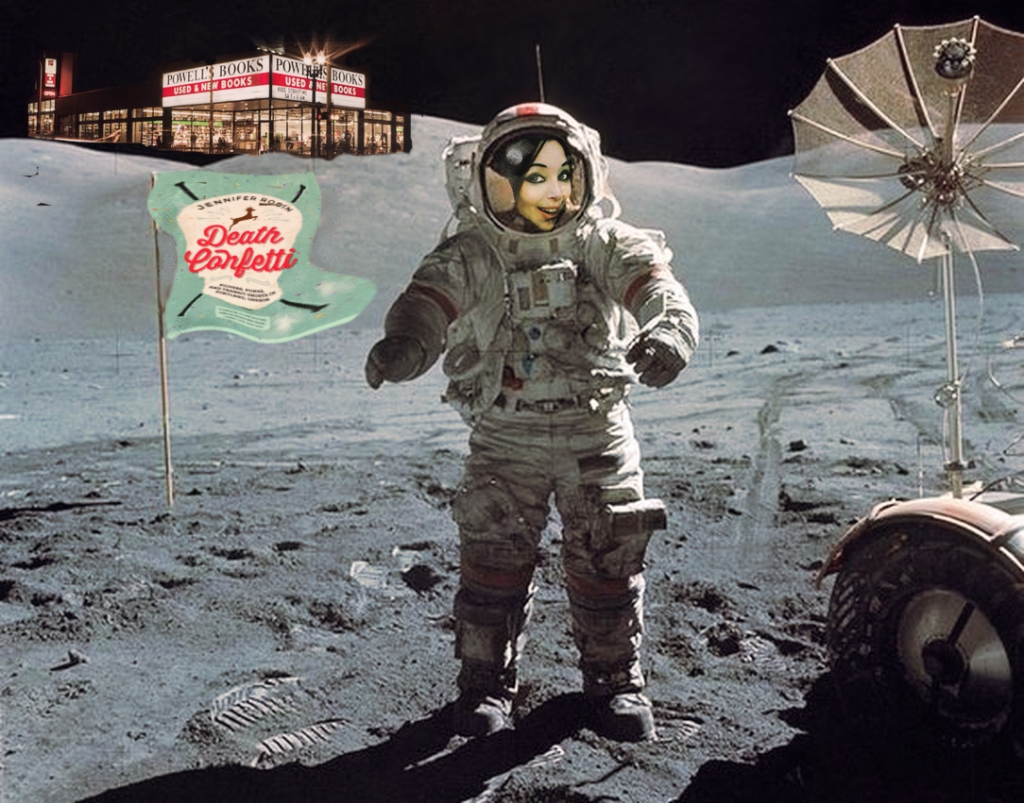 “Portland performance artist Jennifer Robin is a sociologist in leopard print, a street psychologist in Liz Taylor makeup, a spiritual mother hen to the riffraff—the damaged and deranged, the misfits and maligned. Death Confetti: Pickers, Punks, and Transit Ghosts in Portland, Oregon is her observational exaltation to her tribe. Robin is a deeply personal scrapbooker and these works are her vivid Polaroid archives of those who might otherwise be forgotten. Her portrayals are not flattering, neither are they cruel. She describes only what she sees, and her pull-no-punches descriptions are Day-Glo bright, accented with scents of sweat and stale cigarettes.”” —Brian Juenemann, The Eugene Register-Guard

“Death Confetti is a series of autobiographical vignettes from someone who relishes the catastrophic world in front of her. This is a voice that is sympathetic to its characters, a voice that lends understanding and reverence without being dishonest, without leaving out the warts and hairs, without judgement.” —Pork Magazine

“Death Confetti encapsulates that moment when you sit on the bus, steeped in isolated misery, and you look at your fellow travelers and suddenly realize just how deeply odd and fascinating other human beings are. Death Confetti takes that split second of clarity, condenses it, puts it in a pill and invites you to swallow it. Take the medicine that Death Confetti offers you, and the darkest, most ennui-filled corners of your life will start to make perfect sense.” —Cath Murphy, LitReactor 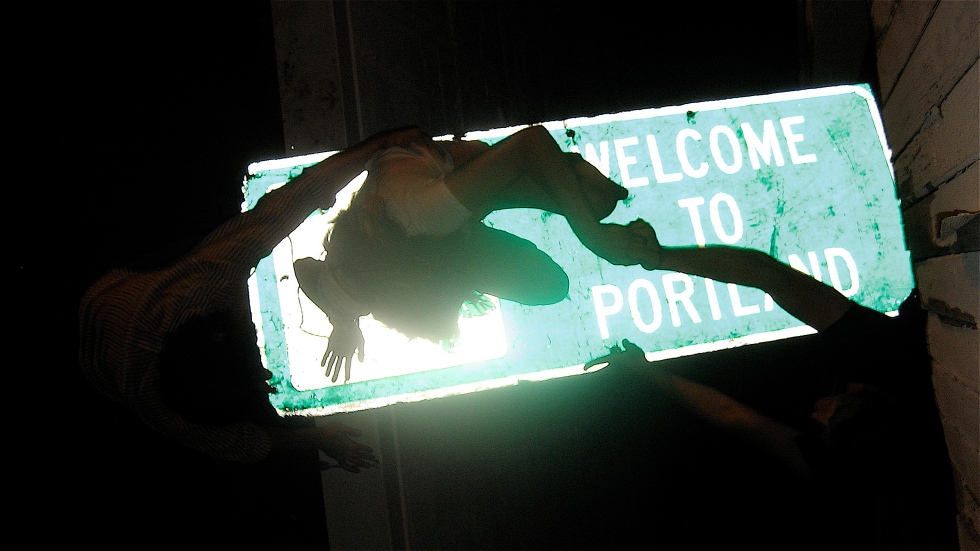 “Death Confetti is a gorgeous, baroque and rich delivery of the flawed beauty in the world. Fall into this book and let it guide your vision.” —Monica Drake, author of The Stud Book, and The Folly of Loving Life

“Jennifer Robin is a freak magnet and she attracts the oddest, saddest, most enigmatic freaks around. That may be because she’s a freak herself—a beautiful freak with big city and back country wisdom leaking out of her brain onto every page of Death Confetti. There’s a lot of high energy and brave living going on in this book. It observes the world (specifically Portland, Oregon) getting weirder and darker, but somehow Robin steadies it in the palm of her writing hand and makes everything seem like it’ll be okay—maybe even more than okay. Hell, it might even be the funnest time you’ve ever had with a book.” —Kevin Sampsell, author of This Is Between Us

“Reading Jennifer Robin’s new book on Feral House, Death Confetti, is so much awesome! I laugh heartily, lying in bed out in the country reading about beautiful loons on Tri-Met buses in my former city, Gusty asking, ‘Mama? Why are you laughing?’ And I can’t quite explain to him how describing an aging party girl as a ‘chew toy’ and celebrating the Putin masculinity of a street kid can make me so happy.” —Tiffany Lee Brown, author of A Compendium of Miniatures

“It takes a special kind of artist to bring people to tears with a Facebook post or turn a doughnut shop into the Serengeti. Jennifer Robin is that type of artist. A stalking tiger of a writer, full of sharp insight and whirlwind artistic intensity, Jennifer is an intense and powerful performer and a poet of heartbreak, banality and strangeness.” —Garrett Cook, author of You Might Just Make It Out of This Alive 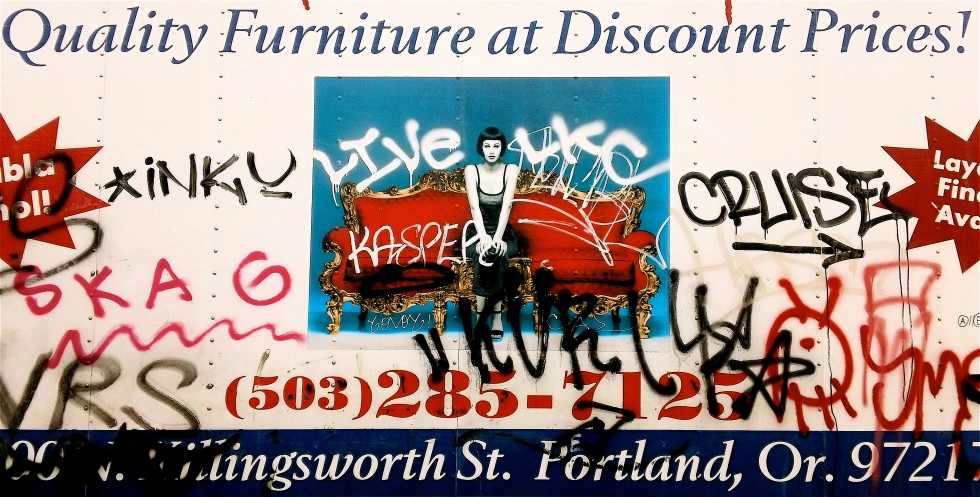 “Robin is a genuine wordsmith, using dazzling and often humorous prose to tell her life story of living as a modern beatnik in Portland, a transplant from the east coast. On display here are a host of bizarre real life characters and the author’s interaction with and observations of them.

“Among my favorite pieces are Robin’s recollection of an insect worshipping boyfriend, the time she was “held hostage” on a hellish bus ride, and her mom referring to Super Bowl Sunday in her own could-care-less way.

“You only think you notice details. You only think you’ve figured out people and their ticks, their licks and their heroin kicks. Jennifer Robin’s book is stunning definition of what it is to be flawed and alive fully of juice and bone. I can’t get enough of her endless realizations.” —Diana Kirk, author of Licking Flames: Tales of a Half-Assed Hussy

“I believe that decades from now, when future historians and anthropologists are wading through the mountains of Portland-related Etsy ephemera and lazy puff pieces about this town’s supposed heyday as a bohemian paradise, the more perceptive among them will realize that Robin’s work nailed it in a way no one else has approached, except maybe Gus Van Sant in his Rose City-related projects. I’m never, ever taking the bus to Estacada now.” —Travis Neal Todd, author of My Own Particular Demonology

“Jennifer Robin is an [expletive] master.This book made me laugh, cry, and feel nostalgic for a place I once loved before a television show romanticized it and tech money seized the opportunity to turn it into another soulless city. But this book isn’t just about Portland, it’s about change. A change of scenery, changing lovers, changing self. It’s a book about hope. It’s a book about defeat. It’s a book that even at its most tragic moment, still manages to sneak in comedic relief. —Tiffany Scandal, author of Jigsaw Youth

“I read half of these pages on Facebook, so I’m biased, but there no better writer of the surreal-non-fiction-flash than Jennifer Robin. I thought Portland was heaven, but Jesus Christ, I’d rather ride a bus in the heart of ISIS than in Portland after reading these entertaining vignettes. It’s not Portland, but the voice of Robin’s that is the star. There is always a keen insight on every other page, and it makes me excited to see what she does next.” —Christoph Paul, author of Psychoanalytic Celebrity Poems, for Yesclash.com 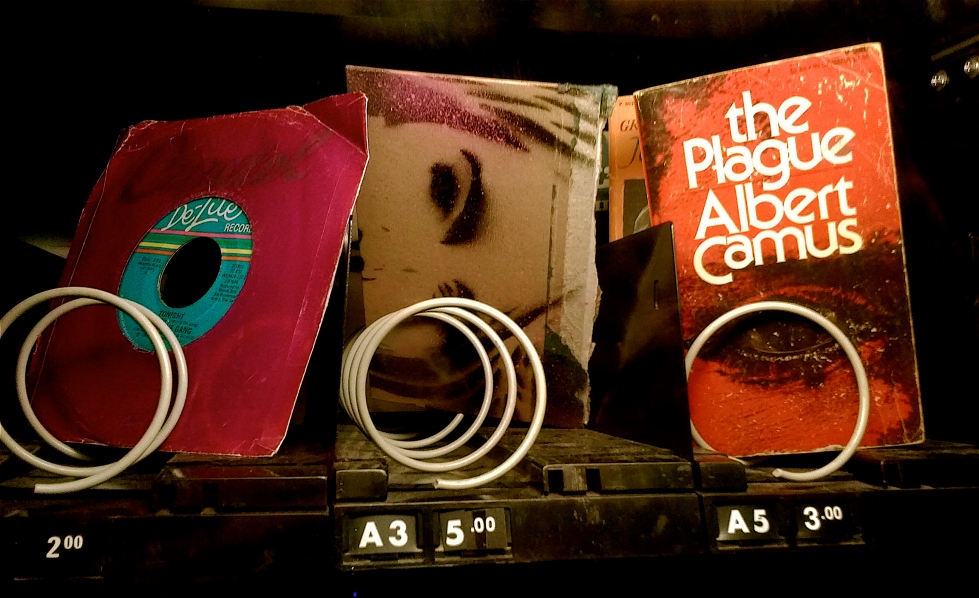 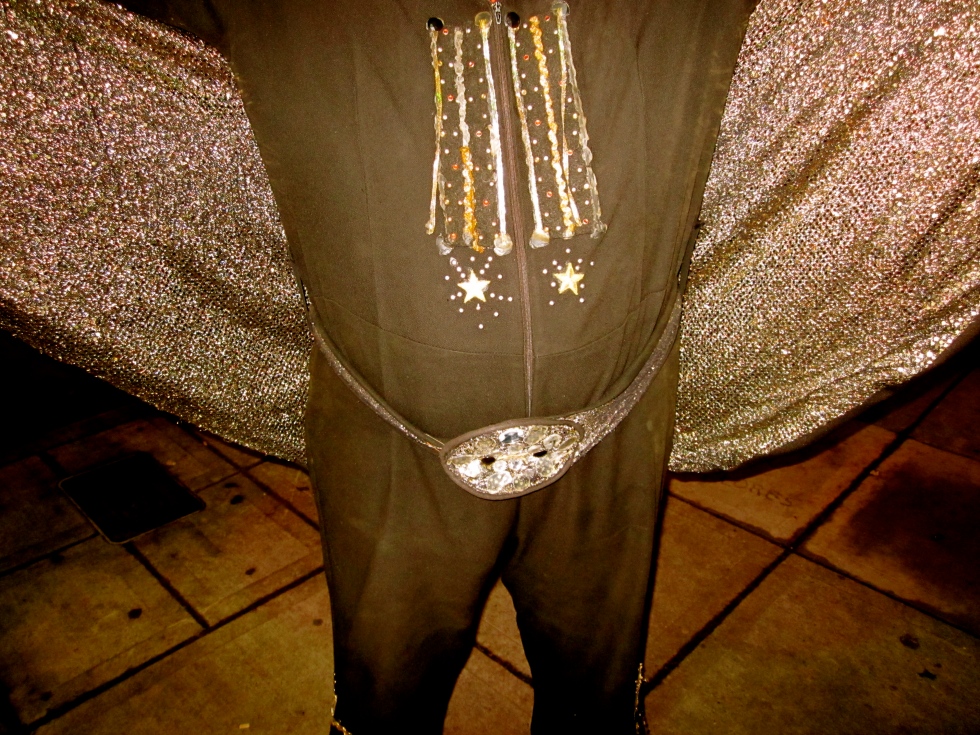 “Robin is funny, profound, and lewd, sometimes all within the same paragraph. She understands that stories work best when told with brutal honesty, and that’s exactly what she does for 200 pages.” —Gabino Iglesias for Dead End Follies

“That she can suss an entire life story from a single meeting is Robin’s secret power. She can see deep inside the people she meets, ferret out their tragedies, their lost hopes, and understand the living death they inhabit. I’m tempted to compare this to William Kennedy’s Ironweed, though it’s vastly different—just for the affection Robin clearly has for people nobody else cares about. This work is important, and it’s incredibly entertaining.” —Lee Widener, author of Rock ‘n’ Roll Headcase

“While I was driving, I found myself furtively reading snippets at red lights…that is how mesmerizing it is to float in the cerebral world of Jennifer Robin. She sees those who most people do not want to see, bears witness to life uncensored, and while immersed in those pages, I felt an absence of existential loneliness and wore a giddy grin.” —Linda Rand, curator of Zodiac Art Space

“Jennifer recalls voices like Nick Cave and Tom Waits on a bus to hell…but in the best way possible. She is also an original voice that deserves your attention. Dig in and take the trip. I read and re-read her words. She’s an inspiration from the outer-reaches!” —Trevor Cunningham, Secret Lab X

“Jennifer Robin is easily the most pure distillation/dispensation of pre- and post-Portlandia Portland that can be had. As Naomi Shihab Nye is to San Antonio, Jennifer Robin is to Portland. This woman can write, and I’ve seen some of the best. Daily, and sometimes multiple times per day, she writes the most viable muse-driven posts Facebook is likely to see. It’s really good. I mean really, really, really good. It stops you in your head as you read it, like if you were walking down the street and suddenly across your lips a gob of spit or a kiss from a stranger landed. Her writing is that raw, and that intimate.” —Matthew Mathis, curator and performer of Stories for Bowie, and Biograyph: a Meta-logue 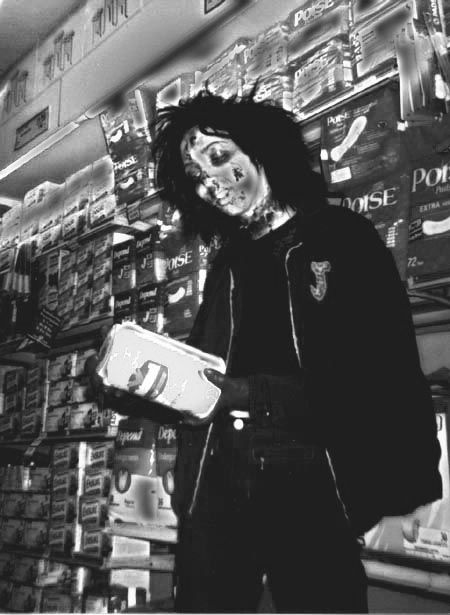 “A fresh, new voice lights up the world of publishing. One of the finest books I’ve read in decades! Jennifer Robin’s voice is unique, fresh, engaging, and intensely observational. Nothing is held back. All flows. All is earned. Recall the vivid sensory experience of Patrick Suskind’s PERFUME? These essays are as evocative as that.”  —Robert Devereaux, author of Deadweight

“She is one of the strongest voices of a generation and you don’t have any idea who she is. But you will. There isn’t another writer like Jennifer Robin. She’s the Hunter S. Thompson of Generation X. You need this book.” —Kevin Strange, author of The Last Gig on Planet Earth